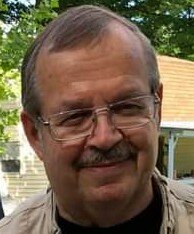 David was the Ordained Missionary Pastor of Mt Washington Church, Hammondsport, NY and was Co-founder with his wife Diana, of Ferguson Ministries, Inc in 1998.

David was very gifted in the arts, playing guitar & singing as well as writing songs and poems. Additionally, he recorded a Cassette tape and a CD of his songs.

He utilized his talents for the Lord in many areas of ministry in camps, nursing homes and many churches. He had a big heart for the developmentally challenged, having previously worked at Pathways, Inc and as a counselor and house parent with challenged adults at  summer camps. He and Diana also ministered in children's summer camps.

He was a Certified Tutor for Literacy Volunteers of America and was a Certified Counselor with the American Association of Christian Counselors since 2000. David & Diana also volunteered with the Franklin Graham Ministry, Operation Christmas Child.

David loved to read and was an excellent student, obtaining a Master's Degree in Religion. He and his wife also attended Billy Graham Schools of Evangelism in Toronto and further studies at Wheaton College, Chicago.

David was predeceased by his parents Richard and Dora Ferguson of Cameron Mills.

He is survived by his wife Diana, daughter Amanda, stepson Todd and 5 grandsons,

In lieu of flowers, donations may be made to the Alzheimer's Association, a charity of choice or to Ferguson Ministries, Inc as Diana will continue with Counseling and other Ministry Activities.

To send flowers to the family or plant a tree in memory of Pastor David Ferguson, please visit Tribute Store
Wednesday
6
July