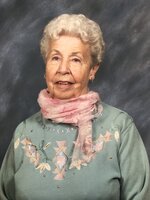 Rita Ann (Watson) Sullivan, 97, born December 13, 1924, passed away on Saturday, April 30, 2022. A native of Bath, NY, Rita was born to Frank Joseph and Agnes Nolan Watson. She was the youngest of six siblings and a member of a large extended family. She graduated from Haverling High School, and then attended Bryant-Stratton Business School in Buffalo. During WWII, she was employed by the Red Cross in Santa Monica, CA, where she met and married her late husband Frank Joseph (Sully) Sullivan. They were married for 50 years and raised a family of six children. Together they were joint owners of Watson's Laundry and Dry Cleaning with Harold and Nolan Watson. She and Frank were also the owners of The Tavern on Liberty Street. Rita spent many evenings volunteering at the Bath Veterans Administration, and also enjoyed her many years as a member of the Bath Country Club. Rita was a dedicated Catholic and member of St. Mary's Roman Catholic Church (now St. John Vianney Parish). In her later years, Rita attended daily mass at the VA Chapel. Rita is predeceased by her parents, her husband, and all of her siblings. She is survived by her children Christine (John Palochak), Cathleen (Jenkins), Kevin (Cheimi), Theresa (Jerry Janicek), Patrick (Mary), and Maureen (Kevin Carpenter), 12 beloved grandchildren, and 6 great-grandchildren (and counting). She had so many dear nieces and nephews and great nieces and nephews that she lost count! Rita was blessed with a beautiful, long life and it was filled by her giving to others. Rita requested no flowers, but would welcome donations to St. John Vianney Parish, Knights of Columbus and the Volunteer Ambulance Corps of Bath. A funeral Mass of Christian Burial will be held at the convenience of the family. Burial will be in the Bath National Cemetery.