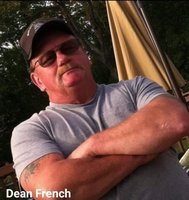 Dean L. French Sr., age 61, of Bath, NY died Tuesday, December 1, 2020 at the Robert Packer Hospital in Sayre, PA. He was born May 9, 1959 in Corning, NY the son of Marvin and Evelyn French. Dean had worked at Dresser Rand in Painted Post. He was an avid NASCAR fan. He enjoyed hunting, fishing, riding a Harley and watching the Hill Climb. Most of all he enjoyed family gatherings and spending time with his friends. He will be dearly missed by all those who knew him. He is survived by his son Dana French of Bath, two grandchildren and one great grandchild; brothers, Dennis French of Addison, NY, David French of Corning, NY and Daryl French of Addison, NY; sisters, Sandra (Larry) Buman of Lindley, NY and Gayle Williams of Savona, NY and several nieces and nephews. He was predeceased by his parents, son Dean L. French Jr. and his brother Dale French Sr. A celebration of his life will be held at a later date.