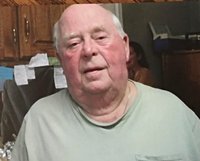 Richard L. Blankenship (Dick), age 76 of Bath NY, passed away peacefully in his sleep surrounded by his loving wife and children after fighting a valiant fight against cancer, on September 28, 2020. He was born in Kanona New York and lived in Avoca for 15 years. Richard married Sharon K. House-Blankenship on July 30, 1966 at the Kanona Methodist Church and became the loving father to her four children. In 1969, they celebrated the birth of their daughter, Shelly Lynn together. They shared 54 years of love and made many memories together. Richard was an employee at Mercury Aircraft for 39 years, and made many close friends over those years. He also worked at AutoZone in Painted Post and enjoyed delivering parts and conversing with many favorite customers. Richard loved sports and is a fan of the Dodgers and the Oakland/LV Raiders. In his younger years, he refereed high school basketball, coached youth baseball and football, and he was an avid bowler. In 1997, he bowled a 299 at Crystal Lanes and his award is proudly displayed in his home. A veteran of the US Army, Richard served from 1964 -1966 having been drafted during the Vietnam War and served in the AUS Artillery Division. He was stationed in Fort Hamilton NY initially and then was deployed to Germany and was ultimately honored as a sharpshooter with the rifle M14. He was a member of the Kanona Methodist Church and the Bath American Legion. He enjoyed signing the book on Monday nights and visiting with the patrons. Richard is survived by his loving wife, Sharon. Together they raised five children: Pamela Andrews (Kirk Borkhuis), James S. Blankenship, Jeffrey (Heidi) Blankenship, Daniel Blankenship and his partner Christy Taylor, and Shelly (Charles) Cagle. He also leaves behind his sisters Patricia (William) Schoonover and Shirley (Myron) Grist. He is predeceased by his father James Blankenship, mother, Helen Conklin, and brother James F. Blankenship. A man full of wisdom, he loved and guided his 17 grandchildren: Jenifer, Joy, Jeremy, Krystal (Derrick), Alieshia, Deziree, James, Ashley (John), David (Martha), Jessica (Nelson), Tiffany, Danielle (Ryan), Christopher (Jordan) , Michael (MaryAnne), and Alison(Tony) and Courtney (Zach) Morrell and Khurk Simms. His pride and joy in his later years was spending time with his 23 great grandchildren: Riley, Xavier, Xander, Mattox, Bailey, Carter, Willow, Samara, Divad, Abigail, Dominic, Logan, Savannah, Skylar, Sierra, Triton, Grayson, Landon, Annabelle, Lincoln, Amelia, Madilyn and Evan. Visiting hours will be held from 3:00-4:00 pm on Monday October 5, 2020 at Fagan's Funeral Home in Bath, NY A private service for immediate family will follow, with military honors. In lieu of flowers, Sharon asks that donations be made in honor of Richard to the American Cancer Society at cancer.org or the Bath American Legion, 14 W. William St, Bath, NY 14810.