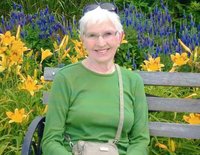 Emma “Ruth” Ayers, age 87, passed away at the Fred and Harriet Taylor nursing home in Bath, NY on June 10, 2020 due to COVID 19, Alzheimer’s disease, and visitation restrictions that hastened her failure to thrive. Ruth was born July 23, 1932 in Canton MO to Frank and Emma Claressa Smith. She was predeceased in death by her ex-spouse, and her brother Joseph T. Smith. Ruth spent many years in Canton, and then moved to St. Louis in 1992. She was a musician who shared her talents, serving as music director and organist/pianist for churches in Canton and in St. Louis. She played for many events including weddings, funerals, graduation ceremonies, musicals and pageants. She was a dedicated member and accompanist for the Canton Festival Theatre in Canton and the River City Pops in St. Louis. She did not hesitate to share her much sought-after knowledge of music with adults and children alike. Ruth was civic-minded and donated her time and money to those causes that empowered women, and that promoted equal rights, environmental protections, and health care for all. Ruth is survived by her five children, Debbie (Kevin) Carr of Franklin Maine, Donna Ayers of Raytown MO, Steve (Cindy) Ayers of Canton MO, Paul (Blanca) Ayers of Conway AR, and Diana “Ti” Ayers of Bath, NY as well as her beloved cat Pumpkin. She was grandmother to Lucas, Janell, Logan, Landon, Brad, Wesley, Jordan, Drew, Rudy, Max, and Sebastian; and great grandmother to Braylin, Paycen, Vinson, Avery, Addison, Elliot, Ella Jo, Dawson, Asher and Leo. She was “Aunt Ruth” to Sybil and Kent, Joan, Bill and Bob. Her vested interest in each of them helped to shape their lives in some way, and they are better for having known her. Ruth relocated to Bath in 2011 to be near her daughter as she needed assistance with mobility and healthcare. Her endearing personality, sharp wit, musical talent and generosity earned her many new friends. As one of her friends at the nursing home said, “I didn’t know your mother for very long, but she just “zapped” me, and I loved her…God Bless Her Sweet Soul.” To honor Ruth’s memory, in lieu of flowers, please consider donating to The Southern Poverty Law Center, Doctors Without Borders, Planned Parenthood of the Southern Finger Lakes, or Sierra Club.