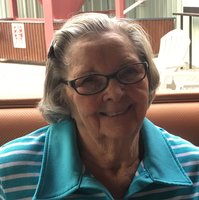 Rita Yorski Bocek passed away peacefully on Saturday, February 8, 2020 in her home in Longmont, Colorado, in the presence of her children. She was born on June 30, 1932, to Anthony Yorski, Sr., and Sarafina Zalewski Yorski in Bradford, NY. She was the middle child among her sisters, Helen, Marion, and Felicia, and her brother, Anthony, Jr., all of whom preceded her in death. Rita married Richard Bocek in 1950. Together, they built a home in Bradford, settled for 25 years in Rochester, moved to Los Angeles to be nearer to their children, and ultimately settled in Colorado. Rita and Richard took pride in helping to raise their grandchildren and great-grandchildren. They enjoyed family vacations and holidays together. Richard passed away in 2016. After the untimely losses of her youngest son, Ronald, and sister, Felicia, Rita dedicated her professional life to caring for others as a Registered Nurse. She was a respected R.N. at the University of Rochester, UCLA, and Encino Hospital. Rita was an outstanding nurse, and immensely proud of the high standard of care she afforded to every patient. She was held in high esteem by her colleagues, and was trusted as a partner by physicians at every hospital where she worked. Rita is survived by her son, Richard Bocek, Jr. (Barbrey), and her daughter, Rebecca Reu (James Franklin). She is also survived by four grandchildren, Kelly Bocek, Jennifer Mack, Annie Bocek, and Scott Reu, and two great-grandchildren, John and Alarie Mack, and many nieces and nephews. Visitation will take place on Friday, 2/14, from 6:30pm - 9pm at Fagan’s Funeral Home in Bath, NY. A Funeral Mass of Christian Burial will be held at St. Stanislaus Church in Bradford, NY, at 11am on Saturday, 2/15. A burial service will take place following the Funeral Mass at Holy Sepulchre Cemetery in Bath, NY. A meal will follow at St. Stanislaus, where we will share loving memories of Rita. In lieu of flowers, memorial contributions may be made to the UCLA Jonsson Comprehensive Cancer Center.